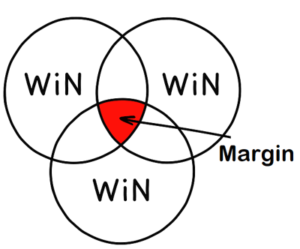 There’s a reason why a lot of people think that the ‘bookie always wins’. In short, it’s because every bet that you place has a margin built into it, meaning that even if you win your bet the bookmaker you’ve placed it with doesn’t lose as much as you might think. Every single bookie that has ever made any money has offered odds that are lower than the actual likelihood of an event happening. That’s their margin.

They add in their margin as something of a ‘charge’ for the punter to allow them to place the bet, better seen as the equivalent of a commission. It’s important to work out these margins because the higher the margin is, the less value you’re getting from your bet. It’s not an easy calculation to make, but doing so every now and then across a range of bookmakers could help yo figure out which is offering the best value.

Working Out The Margin

The easier a bet is, the simpler it is to work out the margin that has been applied to it. For that reason, we won’t be looking at overly complicated wagers with plenty of different possibilities here. Instead, we’ll be limiting our explanation to the more straightforward bets to give you an indication of what to expect when you come to try to figure out the margin on any bet offered by a bookmaker.

Let’s start by looking at the world of head-to-head betting. Imagine that you’re watching a basketball match and the odds for team one are 2.48 and those of team two are 1.54. You might wonder why we’ve chosen to put the decimal odds down there, but the reason for this is that it helps massively when figuring out the bookies’ margin. That’s because you’ll want to use the following formula:

In the example above, that becomes:

The margin comes about because every head-to-head bet has a technical likelihood of 100%, given there can only be two possible outcomes. Anything over 100 when you do the sums is therefore the bookies’ margin as it’s the amount that has been added in to ensure that they make a profit regardless of the outcome. That’s what you need to think about when you do your sums.

Let’s imagine that you look at the same basketball match with a different bookmaker and they’ve got odds of 2.50 for team one and 1.50 for team two. Your formula then becomes the following:

When you take bookmaker A’s margin away from bookmaker B’s margin, you see a difference of 1.14%. That means that you’re getting slightly better value for your wager if your go with the first bookmaker that you looked at rather than the second, given that they’re taking 1.4% less. It might not sound like much, but spread over the long-term and it can work out to be a good amount of money.

What About 1X2 Markets? 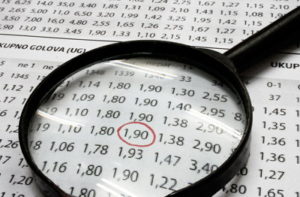 The football lovers amongst you will be wondering what you can do to figure out the margin in the world of Match Betting. Also referred to as the 1X2 market, where 1 represents the home side, X the draw and 2 the away team, it is one of the most popular bets that gets placed on football matches. Because there’s a third option in there, the formula that you need to use to figure out the margin changes to the following:

Let’s imagine that we’re looking at a match between Liverpool and Everton, with the former side given odds of 1.75 and the latter odds of 3.95, whilst the draw is seen as being a 3.70 likelihood. To work out the betting margin of our bookie of choice we insert those numbers into our formula, so it now looks like this:

Again, the numbers will add up to 100 because we know that there will definitely be a result in the match, so anything above 100 is the bookmaker’s margin. The key thing to figure out is what value you’re getting from your bookmaker, so you go and look at the odds of a rival and discover that they’re offering odds of 1.70 on Liverpool, 4.0 on the draw and 4.0 on an Everton win. That formula now becomes this:

This time the second bookmaker is offering better value to the tune of 1.6%. Though time-consuming, you might want to check out a wide range of bookies to find out which one is offering the best value on football betting, given that there can be a huge discrepancy between them on such a popular market. You can’t assume things will always be the same either, given margins are forever changing.

As mentioned, we’re only looking at the more simplistic bets here. It is still worth acknowledging that much more complicated bets exist, especially in the world of football. Take a First, Last, Anytime Goalscorer market as an example of this. There are so many variables that need to be taken into account, not least of which is how many players could potentially score a goal.

It goes without saying that such a bet becomes exponentially more complex when you start to try to figure out the margins involved. In this sort of instance, the key thing to do is look to see which bookmaker is offering the bets odds, because the likelihood is that they’ll have the smallest margin and will also give you the biggest payout. That is, after all, what we’re all in it for.