Paddy Power have received another slapped wrist for one of their TV ads, becoming the latest in a long line of banned commercials.

While it’s true that the famously tongue in cheek bookie have overstepped the mark in the past (the transgender spotting advert in 2012 was a real clanger) this latest ban seems overcautious.

Watchdogs are on high alert for anything that could be considered promoting unhealthy gambling behaviour, and rightly so, but I’m struggling a bit with this one, and I’m a supporter of sensible regulation.

The ad in question concerns the promotion of PaddyPower’s Wonder Wheel; a free to play wheel spin game in which players get 1 spin per day, and can win cash, freespins, free scratchcards, etc.

Why Was the Ad Banned?

You might well have seen the advert in question.

It’s the one with the young couple visiting the female’s parents house, and the male is playing PaddyPower’s Wonder Wheel game.

The female asks her fella, “Do you think i’ll end up looking like my Mum?”, but the guy is only half listening and says “I hope so”.

Awkward looks all round, then he wins the top prize of £100.

Narrator: “No matter how badly you stuff it up, you’ll always get another chance with Paddy Power Games.”

The main issue though was the fact that the man was distracted by the game. According to the ASA this was considered to qualify as having:

“portrayed gambling as taking priority in life, over family”.

Had the man been momentarily distracted by the footy instead, then hit the spin button after he made the comment, I assume it wouldn’t have been an issue.

That’s the sort of forensic detail we are talking about here.

See what you think:

Outraged? Not bothered? What do you reckon? 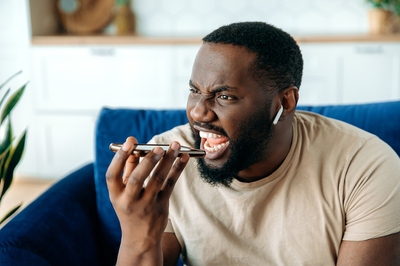 After being broadcast to the whole nation of 68.5 million people, the Advertising Standards Authority (ASA) received a stonking three complaints about the ad.

One outraged viewer went as far as saying that gambling had caused the man to make an ‘inappropriate remark’.

I bet it’s a right hoot round their house…

If you are picking up a tinge of sarcasm in this post it’s because i’m being sarcastic.

The advert made it through the checks done by Clearcast, the company who sign off on adverts before they can be broadcast in the UK, and presumably, if none of the three complainants had been watching television on the night they saw the advert the ASA wouldn’t have got involved.

I have zero time for gambling companies who behave irresponsibly, be that advertising, rogue VIP managers or anything else, but was this advert really promoting irresponsible gambling behaviour?

I don’t think so.

“Paddy Power is committed to responsible practice and it is always our intention to comply with the advertising codes. We accept the decision of the ASA and will consider its broader guidance moving forwards.”

This one is extremely subjective if you ask me, so i’m inclined to believe they thought they were on the right side of the line.