Perhaps one of the most intriguing sportsbook software providers, OddsMatrix has some of the most sophisticated technology currently out there.

Regulated and licensed by the UKGC, they are always striving to keep ahead of their competition, evidenced by the announcement of their partnership with Betting Promotion in March 2019.

One area where OddsMatrix have excelled and which really showcase their selling point is their very own data feeds which have proven to be considerably versatile. What this allows is for the provision of data feeds to be integrated with existing ones in order to assist both OddsMatrix and Betting Promotion by expanding their services – essentially a win win. 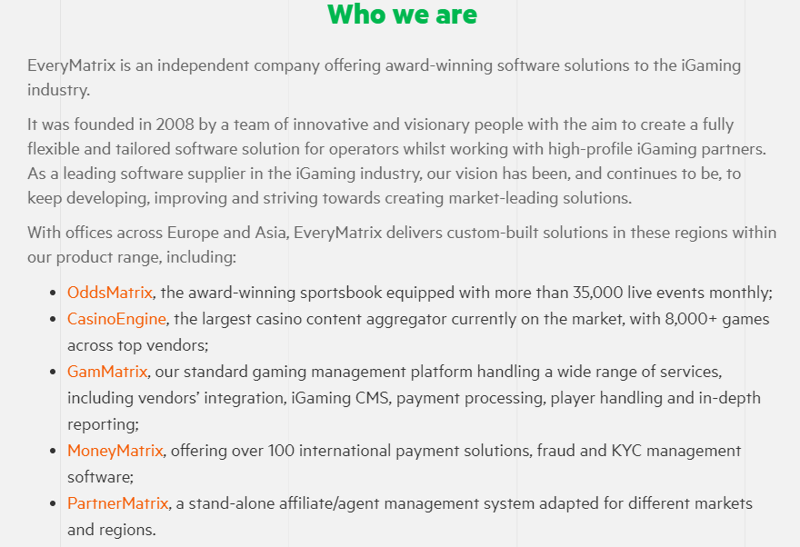 Affiliation with such a company only serves as beneficial for OddsMatrix, whereby the link to such a successful and well known entity will do wonders for expanding their own brand within the iGaming community.

With the first half 2019 in particular representing a great deal of progress for OddsMatrix, cautious indications point to further momentum in years to come, with this partnership representing the tip of the iceberg.

Having worked hard to put the foundations in place for their main offering; Casino Engine, it seems that technological strides forward as well as business development have been paramount to this success.

There are also indications that OddsMatrix is primed to announce an even newer partnership with what appears to be a considerably big fish which should help them to further make a splash in a significant ocean of motion, with multiple other one tier casino deals also in the offing.

Where OddsMatrix have excelled since inception is being able to make the step up from just being known and recognised throughout the industry as a white label supplier and they have put a lot of work into establishing themselves as a serious contender with a bright future.

This has enabled them to concentrate on securing big ticket clients by changing their product offering and focusing on more niche solutions, which are in high demand.

Putting distance between themselves and the white label space, it has ensured that they are no longer competing with every other sportsbook provider out there, but now with a calculated investment in the development of their own technology, which is starting to pay dividends, they have started to differentiate themselves.

This shift to becoming primarily a software provider creates considerable advantages, the first one being that they now have their own unique intellectual property, backed up by robust technology which meets the latest demand of the industry. This is a big draw for potential clients who are constantly looking to stay ahead of their own competitors by using this software to attract new customers.

Highly Tailored Offering for its Clients 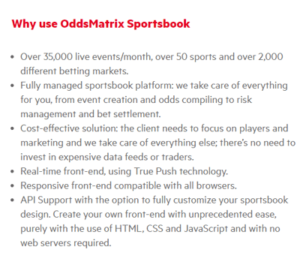 OddsMatrix particularly focuses on a customer-centric approach which gives clients a tailored choice of the products that they want as part of their package. Because OddsMatrix also focuses on casino technology, which in recent years has pushed on and been developed considerably.

While sport is OddsMatrix main origin, with them initially having just a plugin but without a platform, their technology is now considerably effective and has made strides since they rebuilt from scratch in 2017.

The amount of data that their sportsbook in particular can process, especially from an events and markets perspective is one of the reasons why OddsMatrix is such an interesting option for its clients.

Their client list is quite considerable and appears to focus more on the small to medium sized market with a names such as mybet, tipico and jetbull, though it does have a few notable feathers in its cap with BoyleSports and Sporting Index probably their biggest names.