The online gambling American gold rush continues with the latest takeover bid for a UK company.

Ladbrokes and Coral owner, Entain, turned down a bid from their own American partner MGM earlier in the year, saying that the £8 billion offered significantly undervalued the company, but now a new suitor has taken up the scent.

DraftKings is prepared to stump up a massive $22.4 billion to acquire Entain – that’s around £18 billion and more than twice MGM’s offer. Entain have said they will ‘carefully consider’ it, which suggests it is only bordering the true future value of the gambling group.

So will Entain accept the offer?

MGM Still in the Picture

Although initially rejected, MGM are now allowed to make another bid for Entain if they want to, and their cash position has significantly improved since the beginning of the year.

The pre-existing partnership between the two companies is also an important factor here.

American companies have been unable to offer online sports betting for much of the online gambling industry’s time in the sun, so joint ventures like this one and the one between Caesars and William Hill were established to create a win-win for both parties.

Now the American market is opening up, those big American companies no longer want to share, and are trying to buy the expertise they need to succeed alone. This is what MGM wanted to do with Entain.

They have already made it clear that accepting the bid from DraftKings will render the partnership null and void, so this is something else the UK company’s board will need to consider before making their decision.

They may even be secretly hoping for better bid from MGM, as it will undoubtedly be easier to merge into a company they already have a relationship with than one it doesn’t. 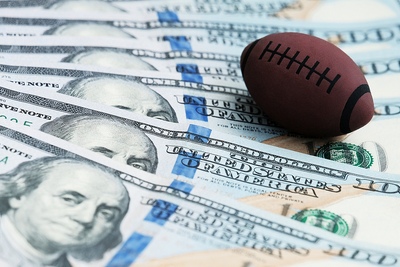 Everyone knows what is going on in the American market by now.

State by state, the country is opening up to allow online sports betting and gaming, and gambling companies are chomping at the bit to improve their capabilities and gain market share.

To give you some idea of just how much money there is to be made here, a US gambling research and consulting firm suggests that money spent on sports betting this year in the US is already at the $1.8 billion mark, compared with $2.5 billion in the UK.

What’s more, some of the biggest US states are still to push the button on legalising online gambling, and when they do, the numbers will really hot up.

By 2033, the amount spent on betting online in America is predicted to be around $40 billion, dwarfing the UK, and a DraftKings/Entain merger would control about 40% of the market share according the analysts.

So you can understand why there is such a battle to get ahead of the competition.