Gambling giant Betsson AB have dropped something of a bombshell today and announced, with immediate effect, that they will be surrendering 3 of their 4 UK licenses and closing 8 of their brands to British customers.

The one remaining brand available to UK players and bettors operated by Betsson will be Rizk.

Betsson is a Swedish company so the UK was never their home turf, but many of their online sportsbooks and casinos had become well known names among UK gamblers.

Which Brands are Leaving the UK Market?

There are eight brands making their exit all in all, and some of them are pretty big names all things considered.

Customers of the following sites will have to find somewhere else to make their bets and spin the reels:

It will come as a particular blow to international horse racing fans as RaceBets is one of the most comprehensive betting sites available.

Rizk Casino will now be the group’s sole interest in the UK, offering both an online casino and a sportsbook, but undeniably being best known as an online casino. It’s unlikely that sports bettors from either Betsafe, Betsson, or RaceBets will see it as a viable alternative.

Are These Brands Closing Down?

Betsson’s brands operate in many other markets outside of the UK and the company have licenses in 11 other countries all told, so although these sites are no longer available to UK customers, the brands themselves will not be closing down.

They will remain open to players from other countries, but UK customers will have any money in their accounts returned before those accounts are closed.

Any open bets at these sites will be paid out as winners according to reports, so that’s something.

Why are Betsson Surrendering Their Licenses? 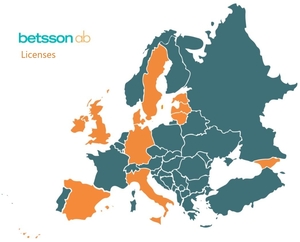 It sounds a bit like a politician resigning in protest doesn’t it, but it’s a formality really, they are simply saying that they do not want to trade in this country anymore – well, except for Rizk.

The UK only represented 3% of Betsson’s income anyway, and with the ever tightening regulations coupled with the unsteady economic situation at the moment, it just made more sense to put their effort and resources elsewhere for the time being.

The costs of keeping up with compliance and regulation changes from a technical point of view were too prohibitive and no longer sustainable when looking at the group’s long term plans.

They have been slowly winding down in the UK for a few years now, having closed their NetPlay TV subsidiary and shutting down their London office in 2018, and previously closing down Thrills Casino to UK customers.

The hope is that this new one brand strategy will be more efficient and targeted, allowing the company’s remaining UK activities to become more impactful.